My Life As An Entertainer 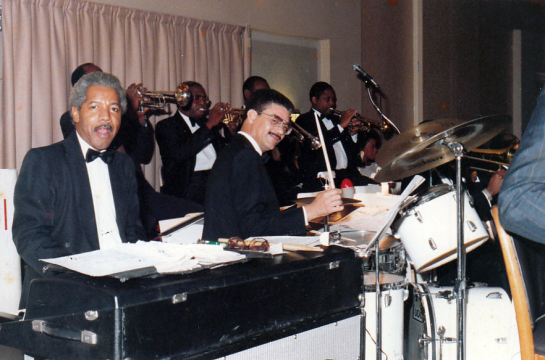 Music in my life started early...about the age of eight. My dad built a cafe from the ground up, it wasn't "plush" but  new,  and afforded some intoxicating fun

for people that had worked all week.

Nights that he had a band, I could stay only until the crowd began to fill up

the joint...my dad would point toward the door...that was my exit signal!  I

would go around back to the backdoor to where the drummer was setup...

and it all started from there !!!

I began practicing on a metal 5 gallon pail. I'd place a few small "rocks" on the

pail to get a snare drum effect. My mom soon bought me a set of bongos.

! Boy was excited !  But I saw no one playing bongos...the drummers played

a full set of drums.

and couldn't sing my way out of wet paper bag !

In a couple of years I was off to junior high school and they had a band...and

they had drums...but the band director told me to play the E-Flat horn because

he had enough drummers. I "held" the E-Flat through grades 7 and 8, with

passing grades...but I never learned to play the horn !  The last day of school

before the summer vacation he heard me play the drum...and told me when

I return to school that I could play drums...what a relief !!!  I played that last

of junior high school...but the real learning awaited me at Wheatley High

During the summer before entering high school...I landed me a gig with a

guitar player named Lil Rose.  He owned and provided all of the instruments.

I entered high school and found the band director to be very strict...demand-

ed perfection in the marching band and the concert band. My experience

under J. P. Mosley was very, very beneficial and help shape me professionally.

I worked with Vernon Davis for about a year, and it was very beneficial. ( I'm

not degrading Li Rose as a musician...but it was time for me to move on)

I got a chance to move to the next level, playing songs like "Turn On Yout

I hooked up with Sherman Roberson and The Silvertones Band, he had a

3 piece band, was young like myself, and father was the manager. We

worked together in his band for about 2 years...and then we upgraded !

We both, Sherman and I joined Conrad Johnson's Band. Conrad was the

band director for Kashmere High School. He was well known and played

clubs gigs as social gigs at some of the better hotels.

I finished high school in the summer of 1966, but my future plans were

put on hold...I was involved in a bad automobile accident ! My leg was

broken in the thigh of my right leg...my bass drum foot and leg !  I had

his bass drum "leg and foot."

About eight months in my recovery, I got a call from Charles"Bubba" John-

he needed a drummer.  I explain to him that I no longer played drums. I

don't think he heard anything I said cause he insisted that I try...and with

doubt in my abilities...I played the gig !!!  The other band members were

satisfied with my performance and that motivated me. In six months I

was playing much, much better...thanks to Bubba Johnson !

My playing career "took off" after my leg healed. I played with a lot of

artists over the years, been through 30 states and through 60 towns

and cities. My favorite tours was with Etta James, Tyrone Davis, Bobby

Bland, Jackie Wilson and Buddy Ace. I was the studio drummer at Duke

Records for about 4 years, and recorded with many artists.

stepdaughter.  The marriage ended in divorce.  I then partnered up with

a ventriloquist dummy named Jesse...and toured with him and had some

success!  And success it was, until Jesse started insulting hecklers WAY...

WAY...too strong!  So strong, until the heckler threatened to shoot the

dummy!  After several incidents...I decided to end the act...because I

could not control the hecklers...or the dummy !

I've had a good career in entertainment...I've also had some "bad times"

in the entertainment...but the good outweighs the bad.